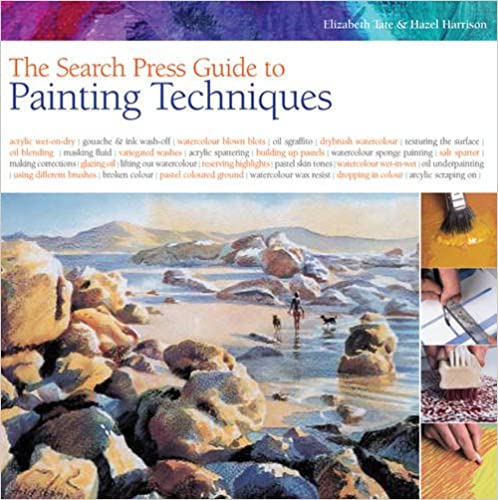 With a widely varied mix of new titles on offer, I’m going to start with something old, although it’s not immediately obvious that it is. The Search Press Guide to Painting Techniques started life in the Encyclopaedia series that was so successful several years ago. Actually, it was so long ago that many of you probably haven’t seen it, but those with a longer memory might want to check their shelves before investing. Publishers often eye up their backlists and wonder whether they can revive an old favourite and my response is usually “I wish you hadn’t”. Although there are only so many ways you can write about painting, books have their time and rarely come back successfully. This, however, is one of the exceptions. The encyclopaedia series was always led by its design and was one of the first places where the idea of presenting things in a single-spread format appeared. The illustrations were the main thing and the words were reduced to captions that just explained what you were looking at. This is often characterised as dumbing down but really it’s not, because art is about what you see, not what you read and, if you can’t show it, you’re probably not doing it right. In this new edition, what has happened is that the design has been updated but the concept remains the same, making the book as fresh now as when it first appeared. So what do you actually get? Basically, a thorough grounding in the techniques of painting as they work in practice and not just as a series of dry exercises. Good techniques is essential if you want your work to be anything more than expressive chaos, but getting bogged down in it can stifle the creative process. The balance between the two is a fine thing that this book achieves really rather well.